How To Fail At Collaboration (Without Really Trying) 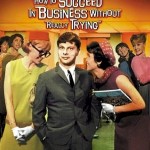 In the Frank Loesser musical, “How To Succeed in Business Without Really Trying“, a book of the same name helps a one-time window washer climb the ladder of corporate success. Played in the film and on Broadway by Robert Morse (and in the 1995 revival by Matthew Broderick) , the trouble comes, according to the book, if you are in charge of marketing – then you really need a great idea.

A period music of the 50’s and 60’s, sometimes things just don’t change.

Since the beginning of modern economics, managers introduced new processes. Sometimes they worked and sometimes they failed. If one of the most repeated single points of failure is the introduction of a new process without regard to the culture of the company, then the most repeated single point of epic failure is the expectation that people will use technology to start to share content and magically begin to collaborate.

Read how to avoid failure at collaboration – and take note, it’s easier to fail than succeed. If it was easy, everybody would do it. Wait – that’s a different movie. The full story is in my MediaBullseye.com column.