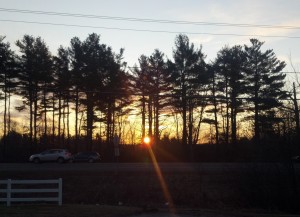 Update: 2043PM ET Election Night: Google Trends has updated showing Ron Paul just ahead of Romney (which means Romney should win; read the article below for the reason); Santorum and Huntsman. Time to see what really happens!

Update: 1043AM ET Election Day: Google Trends has not updated with yesterday’s data, but Suffolk University polls are falling in line with the trends and my analysis. Let’s see how the end results align with the data.

This is not about politics, it’s about analytics. And a question.

I can use Google Trends to see who is going to win/be eliminated from American Idol and Dancing With The Stars. More times than not, the trend of people’s Google searches will predict the results for the week, or even the series finale. Using the same logic, could I predict the results of the New Hampshire Primary?

I fired up Google Trends and searched the candidates in a way that brings back the most results.

I pulled the data for New Hampshire Google queries through sometime on Sunday, Jan-08. This is NOT a poll: These are the queries on Google made from New Hampshire. We don’t know how many Independents will cast a Republican primary ballot, or if there were other factors that created more searches on some candidates instead of others. Just like Dancing With the Stars. The trends show:

Reading the trends, you would want to think that Ron Paul could win, but the mitigating factor is that he showed high in Iowa as well. For Paul, searches may not translate into votes the same way that it would for other candidates. Why? The data doesn’t answer that question. Romney would look to lose – as he would have in Iowa . In fact, it may be more likely that Romney voters had already made their mind up earlier in the process and have stopped searching. Or perhaps they don’t use the web as much to search for information – something that could prove interesting in the General Election.

Based on the Iowa data (below) and the New Hampshire trends, it seems like Romney will win, but perhaps not as big as projected, Santorum and Paul in second and third. 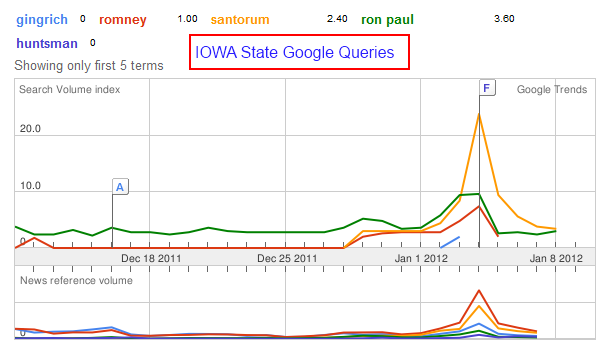