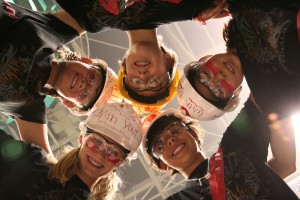 While “mutant powers” sounds more “comic book” than technology, the year 2015 seems to have mutant powers of its own. Technology is enabling behaviors that are simultaneously familiar like storytelling and unfamiliar like sharing lives with casual or business friends.

Social media, the web and mobile devices are so ubiquitous, we’ve almost forgot about how the Internet was so disruptive to the global economy just over a decade ago. Social media seems to be the key disrupter at the moment, but in a strange twist, YOU are the real disrupter creating the mutant powers. Don’t feel guilty. You rock at this. Technologies can’t do it alone, they need adopters . Adopters need reasons to adopt, and we are together, making a new economy.

Communication and Collaboration are two powerful behaviors. Introduce the mutant powers of reaching around the world to share thoughts (a.k.a. social media and collaborative apps) and these become powerful ways to pair abilities in ways that were impossible 10 years ago.

If only it stopped there… but new technologies based on the so-called Sharing Economy are already having their effects.

More of us are wearing mini-TV screens on our wrists to tell us what we need to know, in real time. 3D scanners and printers, now under $4,000 (US) are producing everything from prosthesis to clips aboard the International Space Station (ISS). Even customized Oreo cookies have been printed with 3D technology. Augmented Reality continues to emerge and gain acceptance. “AR” displays real-time knowledge as we look at and engage in the real world. This makes us and our children real-time and life-long learners. And this is just the beginning. Even banking is starting to become an invisible service as users pay with their phones, and soon, their jewelry.

2015 and the next few decades will show the mutant powers for what they are: Changing our economy from a manufacturing based economy to a collaborative economy – and even a sharing economy. Instead of buying new, people are buying used items from eBay, Kijiji, Yerdle and Craigslist, sharing homes with AirBnB and OneFineStay and even sharing rides with Uber and Lyft. Connectivity to others is key.

“The people formerly called consumers are now getting what they need from each other, rather than from traditional institutions”, according to the web site CrowdCompanies, led by founder and former Forrester analyst Jeremiah Owyang. “Instead of buying new things, people are sharing products with each other in an emerging societal shift called the Sharing Economy”.

Sharing is part of the equation. Connectivity is part. Our behaviors are part. Enablement and collaboration are all part of what is emerging. And the concurrence of these are our shared mutant powers.