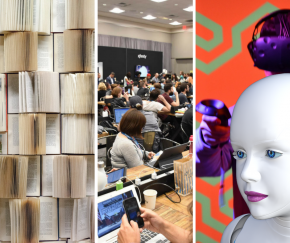 This piece was originally written by Wayne for MediaBullseye and first appeared on December 17, 2009.

The magazine, with regrets to Charles Dickens, was dead to begin with. There is no doubt whatever about that. The register of the burial was signed by citizen journalists, representatives from YouTube, Google and the chief mourner, the Users of the Internet. The Users themselves had signed it. And the Users names were good upon ‘Change for anything they put their hands to.’

The Reader of the Paper, or for simplicities sake, The Reader, felt the electronic information age was like a plague with the design of picking one’s pocket each time a new operating system was developed. It was for that reason, all The Reader knew came from ink on dead trees.

The spirit of Information Past would appear at the stroke of one “as a strange figure — like a child: yet not so like a child as like an old man, viewed through some supernatural medium”. Very much like Waldorf from the balcony of the Muppet Show as viewed on YouTube.

This spirit would hark back to storytelling, the original social media, when “friending” someone was a little more obvious. He would show The Reader how economies developed from barter to agricultural to industrial. He would show how the world changed with the advent of the moveable type printing press. Through it all were stories of the spoken word, and later, stories of the written word.

Upon the clock striking the second hour, and a booming voice called “I am the Ghost of Information Present, look upon me!” It was twice his size, clothed in one simple green snuggie with old America Online CDs sticking out of the pocket of the robe. “You have never seen the like of me before!” and indeed, the Reader of the Magazine had not.

They visited neighbors and friends of the 1950s, 60s, and 70s who had started working with computers in the promise of a more informed world. They viewed the world slowly changing from an industrial economy to a knowledge economy, not unlike that foretold by Drucker and Toffler. From CompuServe, AOL, and Prodigy with screeching 300 baud modems, the Reader saw the continuity of storytelling and the birth of online social media in its earliest forms. He started to notice his folly in rejecting their abilities and possibilities because, simply, they were not ink on paper. What seemed artificial to him at the time, was now strangely very human. People who had no hope were able to find hope with others. People who were not learned were able to learn.

It was a good as gold, and with a good stock market, maybe better.

The next hour was upon the Reader and time for the third spirit.

“The Phantom slowly, gravely, silently approached. When it came, the Reader bent down upon his knee; for in the very air through which this Spirit moved it seemed to scatter gloom and mystery.

It was shrouded in a deep black garment, which concealed its head, its face, its form, and left nothing of it visible save one outstretched hand.” It had an uncanny likeness to the third spirit in the Mr. Magoo Christmas Carol, with the exception of his Twitter handle and Facebook URL on his sleeve. This Ghost was well connected, if not LinkedIn.

“Are you the Ghost of Information Future that was foretold to me?” asked The Reader.

The spirit took out his mobile device and typed “YES :).”

“You are about to show me shadows of the things that have not happened, but will happen in the time before us.” With a touch of the sleeve of the Spirit, they were off.

The spirit and The Reader saw families who could not be together during the holidays. Yet they were connected over the wired and wireless Interwebs. They told stories of generations long gone, and the hope of the great future yet to come. They shared live and recorded video and told the stories as if they lived within the same tribe back when the earth was new.

They saw students learning with others across town, doctors learning from others located around the world, and everyday people sharing their stories in social media. They saw people learning to collaborate in ways never dreamed of by most people before. There was a democratization of information, and yet in some places, it was being repressed. They saw places to share individual gifts and talents using video, the still photo, text and information. These were the elements of the story that The Reader loved and was deeply familiar.

The realization of what was possible was as if The Flame of the Season glowed upon his heart, and, it was said, that his heart grew seven sizes that day (but that’s another story).

I trust you know the rest of the story. He did not cease to become a Reader, but rather also became a writer and participant in educational discussions. It was said that he kept the value of information better and more pristine than any other on the Interwebs.

He became as good an online and offline friend, as good a master, and as good a man, as the Interwebs knew.

“Some people laughed to see the alteration in him, but he let them laugh, and little heeded them; for he was wise enough to know that nothing ever happened on this globe, for good, at which some people did not have their fill of laughter in the outset; and knowing that such as these would be blind anyway, he thought it quite as well that they should wrinkle up their eyes in grins, as have the malady in less attractive forms. His own heart laughed: and that was quite enough for him.”

With special thanks to Charles Dickens’ “A Christmas Carol” as the inspiration for this story. Thanks also for parts of that story finding its way in this story.