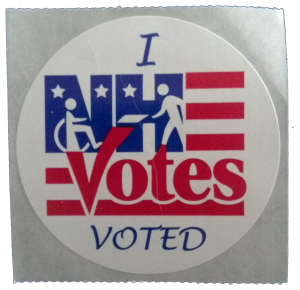 So Google trends can’t predict the outcome of the NH Primary with the same accuracy as it can American Idol or Dancing With The Stars, and for this I am glad. Facebook cannot predict the outcome of such a contest, and for this I am also glad. They do, however, render some very important insights that appear before, during and after the elections – and THIS will change future elections starting with the next primary.

A recent post asked if Google Trends could predict the outcome of the NH Primary in the same way it frequently can predict popular reality show voting. Clearly, there are more dynamics at play in an election than a reality show: Do I like the candidate (or dislike them least); Are they electable; Will they make us stronger, better and happier, etc. There is also a point where an individual makes up their mind, causing Google research to slow down. 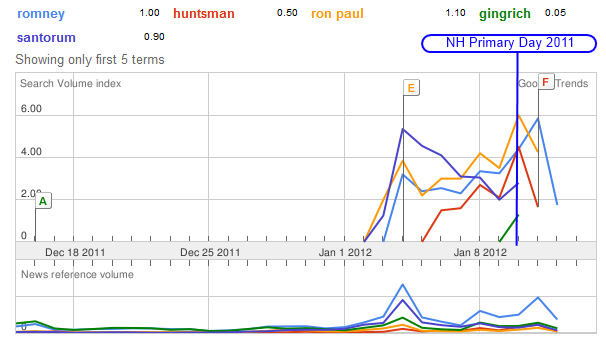 In the Granite State, Romney coverage peaked (lower chart above). As a former Governor of  bordering Massachusetts, he was a known entity. Less research was necessary because most NH voters had an opinion of the candidate. That means less searching. Ron Paul searching could have resulted for numerous reasons, but the previous week’s Iowa caucuses showed heavy searching did not translate into votes. What was interesting is the increase in searches for Romney after the results were announced: It was the strongest search volume he has seen from NH to date.

Facebook data sharing does matter, according  ReadWriteWeb senior writer Marshall Kirkpatrick .  In an important article he alerts us that “Facebook has cut a deal with political website Politico that allows the independent site machine-access to Facebook users’ messages, both public and private, when a Republican Presidential candidate is mentioned by name.”  I bet you didn’t read that into Facebook’s terms of service (ToS).

Politico has a great chart of these Facebook mentions by candidate, and seems to Facebook to be a more effective tool for getting a pulse on the election. Again, Paul’s comments do not translate into votes. Either way, we are missing other key data points, including frequency, sentiment, geography and key words in use. 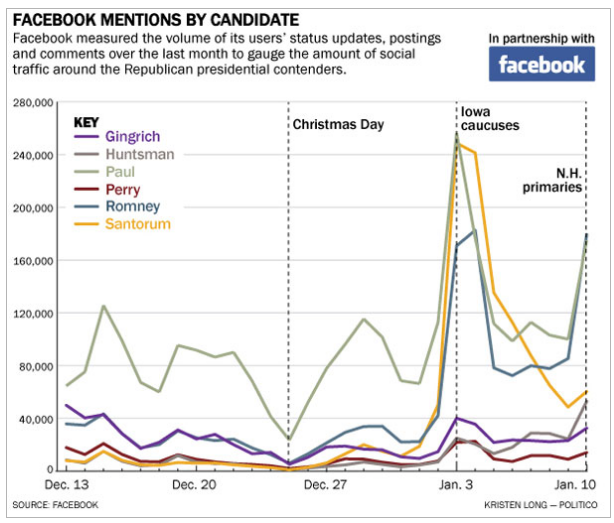 This starts bearing out other possibilities: How can this be used in a general election, or for a business? It is just a good consumer sentiment, or does it hold B2B (business-to-business) commerce value as well?

Many companies are integrating social metrics as a key performance indicator, and it looks like the political world is catching up quickly. Where do you think this will go for the next election cycle?