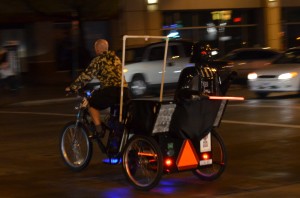 To paraphrase the very social Kermit the Frog, It’s Not Easy Being Geek.  That is unless you are among the 20,000 of the Geek Nation of the South by Southwest Conference (or SxSW) in Austin, Texas this week. We’re not just talking about people who bask in the glow of their cell phone, but who are using mobile and social tool-sets  that would make non-Digital Natives roll their eyes with disdain. To call many of these people “early adopters” would be almost an insult. They are creating the future of what will affect your business and every day life in three to seven years.

The conference has three tracks: music, film and now the largest track, the interactive track. Movies from the likes of Ron Howard premiere here. Bruce Springsteen and J-Z are among the many concerts. And the rock stars of the tech world are here as well. The likes of Alltop founder and former Apple evangelist Guy Kawasaki,  Ben Parr of CNET fame, and virtually anyone else from everywhere else: major companies, agencies and startups the world over. There are secret meetings near by for everyone from (reportedly,) the NFL to corporation groups to share best practices. If you do social media or tech of any type and you are not here, you are missing your key influencers.

There were several notable focus points just two days into the five day event. First, what are the best ways to engage (and measure) more people to the ideas, people and organizations that are important to them. It’s a given the devices will be mobile – phone and tablets – and not desktop computing.  There is also a strong wave that education will become more of a student-centric learning model that changes the role of an educator to be, well, a facilitator of knowledge and the application of that knowledge.

There is an emphasis and strong concern on privacy issues that come with the big data that is being collected through many social channels.

Finally, the big buzz is around the use of game mechanics to make work, play and engagement more fun and, well, engaging. [More about game mechanics and business]

Simply, this is ground zero for the innovation where everyone speaks the same language. Yes, it’s all Geek to me.