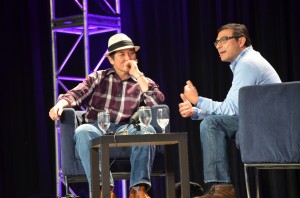 Roald Dahl would have loved the South by Southwest conference and festival, or simply SxSW.

Borrowing from poet Arthur O’Shaughnessy, Dahl wrote that “We are the music makes, and we are the dreamers of dreams”. At “South-by” as the cool kids call it, those dreamers, entrepreneurs, managers and practitioners  applies to emerging technology and how it will affect business and every-day life in the next seven years. This year, some of the doers were harder to find among the reported 24% increase in interactive attendance this year, especially where the greatest value is often networking with the other attendees.

SxSW has three tracks: music, film and interactive which is now the largest with over 20,000 attendees. A few years ago there was the talk of a social media explosion and location based features in phones. This year, hot topics were mobile, location, game mechanics and businesses adapting to social media. It still comes down to how to deal with data and content of all types.

“The amount of data we are producing is doubling each year”, according to scientist, futurist and inventor Ray Kurzweil. He painted a picture of the near future where “search engines will be listening to your conversations… and things will pop up … [with] a piece of information that will help the argument [you are] making.”

Google, speaking of information, seems to be a few months away from releasing new products to supplement the fast-growing Google+ network. Aware of the potential of creepiness, “It s our goal to make ads into content”, according to Vic Gundorta, Senior VP of Engineering. “Our goal is to understand you and make [ads] more relevant. When you share a photo of a party, we don’t think it’s the best time to share an ad”.

Google will continue to leverage your social network in search results making the people who you connect with even more important.

This is the first year the talk of how to make sense out of “big data” – the datasets that are too large to use most data tools to meaningfully parse. Clearly, with web usage data, personal social graph data from Facebook and other social data from Google, contextual data and customer relationship management (CRM) data, there is a lot of potential information. The end game is the ultimate personalization, in marketing terms, a persona of one, or simply business-to-individual.

Within the next year or two, more internet user sessions will start from mobile devices than from desktop computers. The market  direction is pretty much a given. Expect:

The Biggie: Mobile already has massive adoption; more than half US users are already using smart phones. Your customers are sharing their happiness or disdain for your products from their phone. They doing this even if you are not. They expect answers for their issues with the same speed, and without regard for a company’s operating hours. Now mCommerce, or mobile commerce isn’t on a wish list, it’s a given.

There are few best practices in emerging technologies, yet. Companies are grappling with exactly how and why they should be meeting their customers in social media. After all, social media appears to be a one-on-one conversation. Often forgotten is that the conversation is really spoken-once / read-many-times content. It’s still content. It is indexed by search engines. It is amplified by others (both detractors and influencers), and once something starts, it’s impossible to stop.

“We’re looking at the wrong end of the telescope”, according to Joe Chernov of Eloqua. He points out that executives often jump to the new shiny object. “We’re scrambling to find a Pinterest strategy. I will try and come up with a great content strategy and that will be a great Pinterest strategy.”

Even ROI is not measured by most major companies because, since ROI is a financial formula:

If you can’t measure either of these numbers accurately, you cannot measure the ROI on social media. You can however, measure processes that unfiltered customer conversations.

Analytics author K.D. Paine puts it even simpler: “[Companies] don’t know the investment…in terms of money saved … [there are] many better ways to show value: comparative costs, efficiencies, risk aversion …. [ROI doesn’t show] what the value is and it’s not the best way to demonstrate the value”.

The Biggie: You have to do what’s right and, for now, trust taking care of your customers and caring how they want to communicate with you will have a positive, measurable impact as this segment matures…. and some sooner. (Ask Dell, AT&T, Comcast, etc.).

Gaming The System(s): And A Little Bit Not

Games and game mechanics are different. Games are play. Game mechanics are the elements that make games engaging, interesting and effective tools. I’ve already written about game mechanics, but in short, expect better video, processing power and bandwidth combined with the mobile explosion to be part of an educational reformation – in schools and the workplace – that will drive systems from the teacher-lecture system to a student-centric based system with a focus on subject mastery rather than base-level proficiency.

This has already started in some educational and work environments, at least in testing.

This won’t happen all at once, but in pockets. As Ray Kurzweil said, we need to move from the 19th century education system. “We should teach kids how to solve problems, including the problems of the world.”

The Roald Dahl quote I mentioned earlier actually continues, very fittingly:
“Yet we are the movers and shakers,
Of the world for ever, it seems.”